Non-Small Cell Lung Carcinomas (NSCLC) account for around 85% of lung cancers and includes predominantly adenocarcinoma and squamous cell carcinoma. Depending on the patients’ medical status and stage of disease, treatment options include surgery, radiation therapy and chemotherapy. Although cytotoxic chemotherapy remains an important part of treatment, targeted therapies based on genetic alterations in the tumour are appropriate for selected cases. Identifying disease-causing variants in oncogenes associated with NSCLC can help determine which patients are more likely to benefit from a targeted therapy.

Patients with ALK rearrangements may be considered for therapy targeting the activated receptor tyrosine kinase (TKI) that results from EML4-ALK and other ALK fusions.

Responses to anti-PD-1 and anti-PD-L1 agents are enhanced in patients whose tumors express high levels of PD-L1 compared with those expressing low or no tumor PD-L1. As such, reliable testing assays are required to inform treatment choices. Broad access to high-quality PD-L1 testing will help clinicians to identify the most appropriate treatment option for individual patients with NSCLC, including chemotherapy versus anti-PD-1/PD-L1, and single-agent anti-PD-1/PD-L1 versus combination immunotherapy regimens.

The ROS1 gene makes a protein that is involved in sending signals in cells and in cell growth. Mutated forms of the ROS1 gene and protein have been found in some types of cancer, including non-small cell lung cancer (NSCLC), a type of brain cancer called glioblastoma multiforme, and cancers of the bile duct, ovary, stomach, colon, and rectum. The protein made by the ROS1 gene is a type of receptor tyrosine kinase.

This one of the most frequently mutated genes in non-small cell lung cancer (NSCLC), resulting in constitutive activation of cellular signalling pathways that induce and sustain tumorigenesis. By testing for EGFR mutations, personalised treatment can be employed using established targeted kinase inhibitors to preferentially kill malignant cells. All non-small cell non-squamous lung cancers are reflex tested for EGFR mutation following reporting of the patient’s cytology or histology.

If you require advice on sample suitability please contact:

If you require a sample to be tested for the presence of ALK, PD-L1 or EGFR rearrangements please complete the ALK, PD-L1, EGFR & ROS1 testing request form 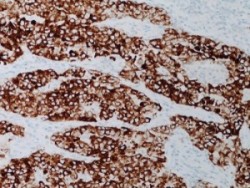 A - Z of all tests
Contact us
Specimen Labelling Procedure