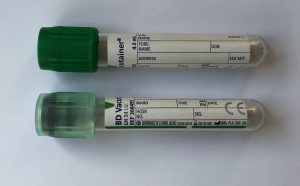 Please indicate if patient has consented for DNA analysis.

Fabry disease in an X-linked in-born error of metabolism known as sphingolipidoses, a subgroup of lysosomal storage disorders.  Incidence is estimated to be estimated 1 in 40,000 to 60,000 males. Heterozygous females may also be symptomatic.

Globotriaosylceramide (aka CD77/Gb3 or ceramide trihexoside), is a sugar-fat compound which accumulates in the body’s cells, due to the deficiency of the alpha-galactosidase A enzyme (α-galactosidase A).

Accumulation of globotriaosylceramide begins in childhood, and intra-lysosomal deposition leads to characteristic features of Fabry disease, including:

Clinical manifestations in heterozygous females may range from asymptomatic to as severe as affected males, but typically with global later onset and slower progression.

A cardiac variant presents with cardiomegaly and mild proteinuria after 40 years of age.

In affected males with classic or variant phenotypes, the disease is identified by demonstrating an α-galactosidase A enzyme deficiency in leukocytes. Further confirmatory testing is NOT required in males if enzyme activity is normal.